Day 7 of #100DaysNoTV was Date Night! We try to do something different for every date night, and when I saw that the foodPark Night Market fell on Rob’s birthday weekend, I thought it would be the perfect way to spend some special time together. Who doesn’t want to spend an evening eating and drinking with the person they love?!

The concept behind foodPark is to unite fantastic street food with the hungry public through weekly lunch markets around Cambridge and pop-up night markets. Daily tweets let you know where to head if you’re in Cambridge and getting hunger pangs.

Heidi White is its founder and she definitely knows her stuff. She writes The Moving Foodie blog and the Ask the Foodie column in Cambridge Edition. Both of which are well worth following if you live in the Cambridge area, or you’re due to visit. Heidi is also founder and co-organiser of Eat Cambridge: a popular food and drink festival now in its third year.

The sign at the entrance of the sell-out event

The Night Market on 9th May 2015 was a fringe event of the Eat Cambridge festival. It wasn’t the first Night Market that foodPark has held, but it was the first at this venue: Gravel Hill Farm, part of the North West Cambridge Development.

I found out about the event on Twitter. I followed the foodPark Facebook page and as soon as tickets were announced we bought ours. Just over a week later it was sold out.

The setting was an old barn which could provide cover should it rain – it didn’t – and next to it was an open area with seating, the live music and all important bar. Surrounded by trees and a few unimposing buildings, it was a place to enjoy the evening draw in and the sun set.

The early evening start meant that people could bring their children, and there were quite a few families, which was really nice to see. Live music added to the happy atmosphere and everyone seemed to be genuinely pleased to be there. There was lots of laughter and smiling faces. 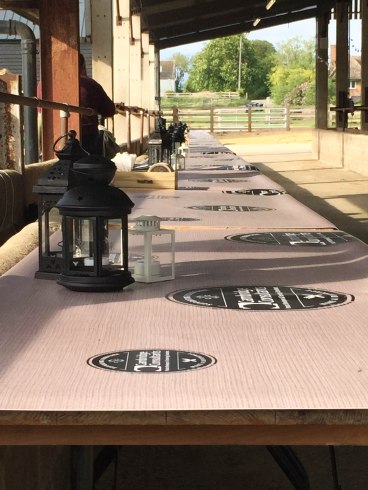 A line of trestle tables with napkins, cutlery and candles 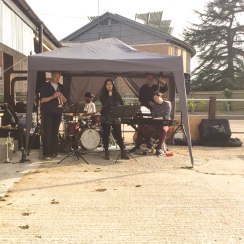 As we were childless for the evening we took the chance to have a couple of beers! The bar stocked most things, although no cider. We’d never heard of Hobo Beer + Co. but they make a really pleasant craft Czech lager. Strong though, so enjoy responsibly.

Music at events like this is always best when it’s live, and they were all local – even better!

We were free to wander around to see what was on offer and this was a large part of our sensory enjoyment; watching meticulous food preparation was fascinating and our olfactory system got a very pleasant workout. There was space to stand or you could sit at end-to-end trestle tables through the centre of the barn or outside at picnic tables.

As the sun began to set people began to make use of the blankets provided by the sponsor, Cambridge Consultants. In all honestly the outside area would have benefited from a few more tables and chairs, but that didn’t trouble us.

Kimchi side from GoGo Gogi Gui

I was tempted by the Korean Gogi burger from GoGo Gogi Gui – such a cool name – which was so tasty, and Rob tried the Kimchi, a side of pickled cabbage with a bit of added heat.

Service was with a smile – even my burger had one! 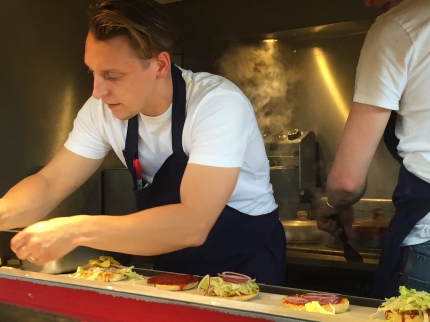 A lot of care and attention goes into making the burgers

The final preparation for the amazing Steak & Honour burgers

Steak & Honour burgers are renowned, and Rob wasn’t going to miss the opportunity for one of their cheeseburgers with fries. Their preparation of rows of burgers is quite something to watch. 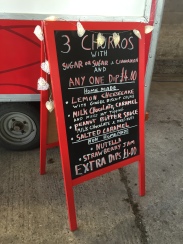 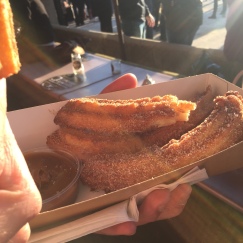 After all the savoury food it was definitely time for something sweet. The sugar and cinnamon churros from Churros Bar were quite spectacular and went together with the salted caramel dip like a marriage made in heaven.

There was a wonderful mix of cuisines – Italian, British, Spanish, Moroccan, Korean and Malaysian, to name a few – represented by the 11 traders listed below. Follow the links if you’d like to find out more about them and the inspiration behind their food.

Churros Bar: Light and fluffy on the inside and crunchy on the outside. We can vouch for their scrumminess. Forget about your hips and try their dips.

GoGo Gogi Gui: I can’t improve on their words: “Probably the only Korean BBQ Burger Street Food Vendor in Cambridge, but definitely the best.” Yep, definitely.

Jack’s Gelato: Ice-cream made by hand – yep, all of it – using organic milk and cream, and Fairtrade sugar. Have you ever had bruichladdich whisky ice-cream? If not, go and see Jack.

Steak and Honour: Proper burgers in big portions using local ingredients made by a former junior sous chef. They Are Seriously Good.

The Juice Box: With a background in health and fitness they know how to make amazingly healthy juices and smoothies. They can even deliver to you at work.

Warming your Cockles: A little truck serving craft coffee and Kiwi and Oz inspired gluten-free cakes. What’s not to love?

Are you hungry now? I am.

There is definitely a buzz about street food and chances are wherever you live, in the UK and elsewhere, there will be street food traders near you. Perhaps even a collective such as foodPark in Cambridge.

If you’re on Twitter, a good way to find info about local events is to search for #NightMarket then under ‘More options’ select ‘Near you’. Don’t forget I’m on Twitter too – come and say hello!

It’s great to see events such as these outside of London, where it’s been a trend for a good few years. I’ve recently discovered there is a monthly Feast on the Street in Norwich (just an hour from Ely) which we must try very soon! 🙂

Rob and I had an amazing time experiencing some of the best street food that Cambridge has to offer. It was clear to see why the event was a total sell-out. If you want to go along to any future Night Markets in Cambridge – next one is in July – make sure you don’t slack when tickets go on sale!

These guys are playing it cool, but they're just as nervous as me 💛🖤
I'm not sure it's normal to be as excited as I am about this arriving today! 😂⚽ #grassrootscoach
What a way to spend a couple of hours 😎🏏
Have a Happy Weekend all. This beautiful plate of K-Mex was made using ingredients from @the_spicery. OMG it was goooood. #thespicery