If you didn’t know that Macbeth is released in UK cinemas on Friday 2nd October 2015, where have you been? You’re probably not following me on Twitter or a friend on Facebook, because I have been banging on about it for months.

Truth is, I’m extremely proud of my contribution (however miniscule) to this extraordinary film. I had always planned to record my experience as an extra for my own posterity, but I thought it might be something worth sharing.

This post is a little longer than normal, but quite honestly, I could have written stacks more. So, feel fortunate – this is the abridged version. Stick with it. 🙂 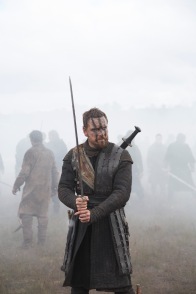 David Thewlis as Duncan and Jack Reynor as Malcolm filming on the Isle of Skye. Photo courtesy of STUDIOCANAL.

Villagers walk to Dunsinane Castle. Ely Cathedral was used as the interior of the castle. Photo courtesy of STUDIOCANAL. 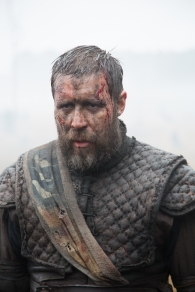 Paddy Considine as Banquo filming on the Isle of Skye. Photo courtesy of STUDIOCANAL.

how it all began

Back in February 2014 I spotted an article in my local newspaper about a retelling of Shakespeare’s Macbeth to be filmed at Ely Cathedral – already used as a location in four blockbusters. The best part? Michael Fassbender was starring! 😉 The second best part? They were looking for local people to be extras!

Having suffered with a month-long chest infection and feeling pretty sorry for myself, Rob encouraged me to go for it. Seeing this as a bit of fun to cheer me up, I applied!

Three weeks later I was confirmed as a Macbeth Villager and told to turn up to a costume fitting the following week. It was actually happening!

There’s no doubt that before arriving in Ely the cast and crew had survived a torrid time, weather-wise, filming on the Isle of Skye. They seemed to bring some of it with them to the Fens, as it was an unusually chilly March. The first day of filming at Ely Cathedral was a cold day and it was no warmer inside  – the cathedral lived up to its role as Dunsinane Castle in 11th century Scotland.

Looking at our costumes you’d think we’d have been warm as toast. Not sure how many layers the men had, but the women had three with extra scarves and shawls. Once my costume was on – a lengthy process – I was half as wide as I was tall. 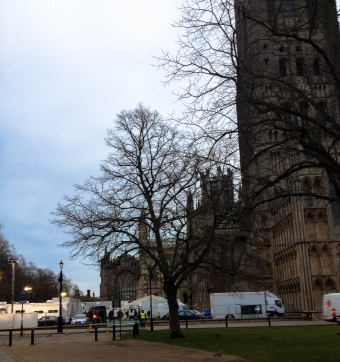 Our movie village in the early hours on the first day of filming.

Me with a fellow extra on the first day of filming

I didn’t think that extras, unless they have close-ups, would get much attention in hair and make-up, but this wasn’t the case. A lot of time was taken to get our costumes just right; our faces, hands and teeth were given the medieval treatment (no white teeth and nails back then!) and we had photos taken of our hair each day to make sure it always looked the same. We were even lined up for an inspection – a bit daunting the first time!

We began the first day’s shoot as villagers and soldiers arriving at their sanctuary inside the castle. The nave and south transept of the cathedral had been entirely cleared, and with a bit of imagination you could feel as though you’d been transported back 1,000 years; the cathedral building probably hasn’t changed much since it was built, coincidentally, in the time of Macbeth. Easy to see why it was chosen.

Sadly, this scene didn’t make the final cut, but we did get an early glimpse of Michael Fassbender. He greeted us individually with a “hello” and his trademark smile – according to the experienced extras, acknowledgement like this is rare from a major star. Michael Fassbender as Macbeth during the Coronation, filmed under the Lantern in Ely Cathedral. Photo courtesy of STUDIOCANAL.

Michael Fassbender as Macbeth and Marion Cotillard as Lady Macbeth at the Coronation, filmed under the Lantern at Ely Cathedral. Photo courtesy of STUDIOCANAL. 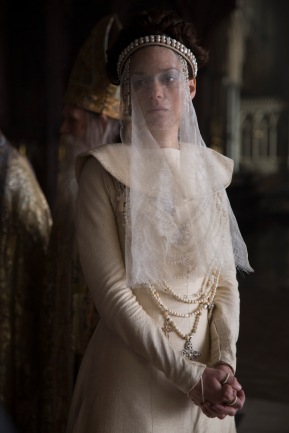 Marion Cotillard as Lady Macbeth at the Coronation, filmed under the Lantern of Ely Cathedral. Photo courtesy of STUDIOCANAL.

We were filming for three long days and there was a lot of hanging around, as we weren’t needed in every scene. We kept ourselves amused in our “Crowd” marquee with card games and endless cups of tea. Some brought knitting, some had homework! Occasionally we were allowed to hover in the background, quiet as mice, watching behind the camera.

Our two major scenes were the Coronation of Macbeth and the banquet during which Macbeth sees the ghost of Banquo. The three images above are from the Coronation, which was filmed under the cathedral’s Octagon Tower. A perfect space for our echoing chorus of, “Hail Macbeth!” You could feel it through your whole body.

At one point the cast got the giggles. Of course, giggles are infectious, so soon we were trying hard to stifle them too. It was a serious scene, you know! It didn’t help that a few of us, watching the guy with a microphone on a big stick (not a technical term), started a rendition of, “He’s a Boom Operator…” (younger readers should google Sade’s “Smooth Operator”!)

Marion Cotillard as Lady Macbeth at the banquet, filmed in the cathedral’s Lady Chapel. Photo courtesy of STUDIOCANAL. 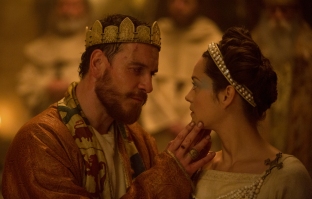 Michael Fassbender as Macbeth and Marion Cotillard as Lady Macbeth at the banquet, filmed in the cathedral’s Lady Chapel. Photo courtesy of STUDIOCANAL.

My absolute favourite part of filming was the banquet, for which the Lady Chapel was transformed immaculately into a medieval banquet hall. If you’ve ever wondered how they get soft light in a large space like this, I can tell you! They had huge lighting balloons suspended high above us; they were like mini airships. There were candles too and a committed – but slightly harassed – team made sure they were all lit for each take.

And, oh my goodness, there was real food on the tables. The less said about that the better, to be honest. Three-day-old boiled eggs don’t smell that good.

Yes, they actually say that!

As our plaits were taken out and we scrubbed the medieval muck from our faces for the very last time, we were visited by one of the directing staff who thanked us. We did get quite a bit of direction on what they wanted from us in each scene – apparently we’d been pretty good. He actually made the effort to find us and say that we’d done well. And, that meant a lot.

Looking very happy to be here!! The marquee behind was our home for the three days. 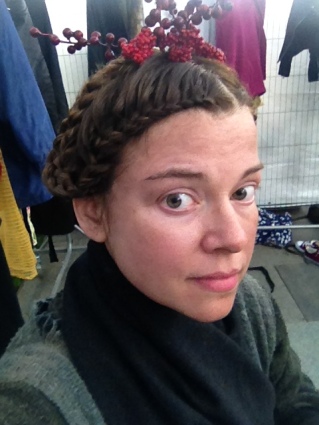 Gotta love those red berries. Looking good for the banquet.

There were points when some people would take sneaky photos between takes, and I wish I’d considered the fact that my tent-like skirt was the perfect hiding place for my mobile. In fact it was big enough for snacks and, to be honest, even a pillow for the parts in the wee small hours when we weren’t in shot!

Apart from a couple of times when it seemed like we’d never get back on set, I didn’t get bored. There was so much to see and replay in my mind: the director, Justin Kurzel, discussing the previous take with the actors; interaction between the crew; multiple takes from different camera angles; make-up reapplied and costumes adjusted with subtlety for absolute perfection. The whole production process is engrossing.

I’ve been lucky enough to ask Seylan Baxter, one of the three Macbeth witches, for her thoughts about the film. I didn’t meet her on set as she filmed in Skye, but my good friend Lizzy (another extra) put us in touch. This is what she said:

“Macbeth was my first time on a film set and I found the whole experience fascinating. The crew is like a highly trained army. Everybody knows their role and does it to perfection. Every single person I met was delightful, from Justin, the director with his gentle manner and fierce passion, Michael Fassbender, who was a lovely normal guy, joking about between takes but utterly convincing as Macbeth as soon as the cameras were rolling, Marion Cotillard who is an utterly delightful person and an amazing actress, to the lovely drivers and make up people and the costume lady who came running up between takes with a down coat and hand warmers to keep us cosy.”

To be honest, her words resonated with me and they’re in common with memories of other extras. I’m not sure whether this cast and crew had an unusually great connection, because this is my first experience. But there was a definite sense of shared commitment, passion and respect among everyone. And, there was always time for banter between takes.

This actually extends into the relationship between many of the extras. We’d never met before, we were from different backgrounds, different ages, yet somehow we gelled together. Lots of smiles and laughs – many of us are still friends and will be watching the film together this weekend.

The Macbeth UK Premiere was in Scotland, as was right and proper. The Festival Theatre in Edinburgh was the venue and when I saw a competition to win tickets, I entered. And won! 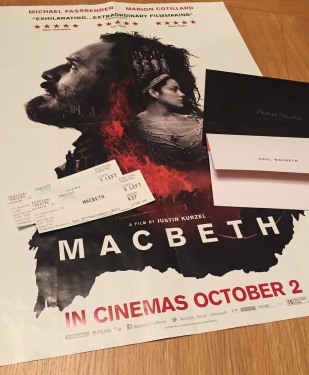 Macbeth poster and tickets to the Premiere.

Sharing the Red Carpet with the stars of this magnificent film was like a dream.

It took a while to sink in: I never dreamed I would be a part of this once-in-a-lifetime event. So, Rob and I had a magical weekend in Scotland’s capital city and shared the Red Carpet with the stars of this most wonderful film.

And, guess what. I made the final cut!! For roughly three seconds. I could not be happier! 🙂

I’ve read reviews stating that Michael Fassbender and Marion Cotillard were born for these roles. I don’t think I’ve ever seen more believable performances than these two great actors portraying Macbeth and Lady Macbeth. I urge you to watch this film – you won’t regret it.

An extra’s life for me

I used to think that opportunities to be in major productions only happened to certain people, and I wasn’t one of them: I don’t have any acting credentials or connections. But, truly, anyone who wants to do something like this should feel encouraged to do so; you’ll get so much out of it and you have nothing to lose by applying.

As far as I’m aware, there’s no barrier to entry. Search for agencies that cover productions in your area, and if you’re able to travel the opportunities are far greater. You’ll need to be flexible as you don’t always get a lot of notice, and be aware that filming days can be long.

If you were involved in this production of Macbeth, or have been an extra in another film, I’d love to hear from you!

I realise I’m stating the obvious, but Macbeth counts as one of the greatest experiences of my life. Thank you for reading all about it. 🙂

4 thoughts on “Macbeth – An Extra Tale”