After nearly a year as Communications Officer and Blogger for Cambridge Style Week, I swapped my desk and laptop for a spot at the end of the catwalk with my iPhone, and prepared to live tweet for my first fashion show. On Day 20 of #100DaysNoTV I was one quarter of the live-tweeting Social Media Team for Cambridge Style Week 2016 Night of Fashion.

If you’d read that paragraph to my younger self I’d probably have sniggered into my copy of Four Four Two.  From as far back as I can remember, I was the class tomboy who lived in tracksuits and played football, not kiss chase. Later it was a football shell suit (come on, it was the early 90s!) and I stayed out to play football, instead of staying in to paint my nails.

Gradually fashion did start to play a part in my life, until finally – at around 18 – the penny dropped that I could look quite pretty if I made the effort, and by then I actually wanted to!

My style has remained casual for day-to-day wear, but I’m definitely more fussy about what I choose; the look and durability of the pieces have become important. When I go to an event, or just a night out with Rob or friends, I love to put on a dress and heels, and feel glamorous.

Fast forward to 2015 when my blogger group was approached by Gemma – Communications Manager at Cambridge Style Week – who wanted to build a new social media team. It definitely came at the right time in my life: I was interested more than ever in the fashion world and I now felt qualified (and what I didn’t know I could research).

It helped that Gemma was already a friend (we met through the CambMeetUp blogger group) so I knew we would have a lot of fun in the process. 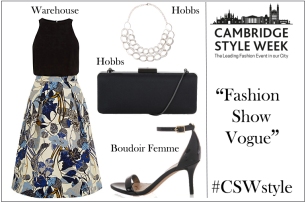 Gemma and I promote Cambridge Style Week, local fashion independents, brands and designers on Twitter, Facebook, Instagram and Pinterest throughout the year, and write regular blogs. Leading up to Cambridge Style Week 2016 we focused on how best to promote our sponsors and the brands whose collections were showing at both Nights of Fashion.

Cambridge Style Week 2016 was my first involvement behind the scenes of a fashion show. The Social Media Team (Gemma, Pippa, Becca and I) were reporting live to our followers, broadcasting details on what was happening from start to finish on both evenings.

The Nights of Fashion featured some pop-up boutiques and a catwalk show in two parts. With a full house in the tall and ornate rooms of the Cambridge Guildhall, there were plenty of opportunities for photos to post on social media.

Below is a very small selection of the images I took; I’m quite pleased with them considering they were all taken on a mobile in quite a dark setting. If you hover over each image you’ll see the brand or designer. 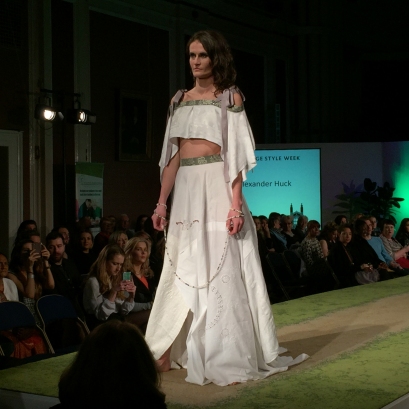 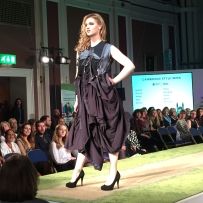 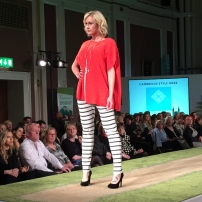 There are some obvious dos and don’ts for live tweeting, but most of it is common sense. Doing some research ahead of time is certainly worthwhile: when you get a momentary writer’s block it helps to have some notes in your head that you can tweet and stop the mild panic! In this case I tried to remember one fact for each of the brands.

Our brief was to tweet a photo of as many outfits on the catwalk as humanly possible and to put one photo from each collection on Instagram. If you’ve been to a fashion show, you’ll know how quickly the models walk up and down the runway. This was no mean feat! There was also a blog written live each night, too.

The pop-up boutiques gave us a great opportunity to talk in person to people we’d been communicating with online. I wore a dress from Five Six Blue Boutique and it was lovely to show the owner, Helen, how it looked.

Without wanting to sound too much like I’m bragging, I think we did an awesome job! The four of us worked incredibly well as a team. They’re brilliant girls and together we managed to give vast social media coverage –a lot of it under pressure. Certainly the brands have given great feedback, which is always so good to hear!

A pre-show selfie at the Friday Night of Fashion

Photograph taken by one of our official photographers, Mario Guarneros

Always time for a selfie!

This past year I have learned so much about the fashion world, met some incredibly talented people and now have a much greater appreciation of how style and design impacts people everywhere, from all walks of life.

You don’t have to be a fashionista to appreciate style; you don’t have to update your wardrobe every season. Individual style is an extension of who you are, and you shouldn’t be afraid to show that to the world.

“Style is something each of us already has; all we need to do is find it.” Diane von Fürstenberg

With that quote in mind, I’m proud of my younger self for ignoring trends and finding a personal style in – quite often – boys’ clothes. Well done little Emma!

If you’d like to read the full report on the Friday and Saturday Nights of Fashion, hop over to the Cambridge Style Week blog.

Did you go to Cambridge Style Week 2016? Have you modelled on a catwalk or worked behind the scenes at a fashion show? I’d love to hear your stories!

My first book club parcel 😍 A book chosen by our group and some goodies for enjoying some me time 💕 Looking forward to a bath by candlelight with a cuppa and a good read. Bliss! Thank you @racheleverett94
Certainly feels like it should be Friday by now... Ermm, Happy ThursYay?? 🤔 Doesn't quite flow off the tongue, does it, but I'll go with it. Have a lovely evening x
Aaaand, relax🍸For us, a fairly good end to this homeschool week – are we in week three or four? Whichever it is, looking back at the other weeks...my god what a sh*t show they were. There was a massive amount of panic in the first couple of weeks (what kind of government springs that on schools with 12-hours' notice? 🤬) and the angst (and tears – from all of us) has only just started to ease a little. And that's only because we've relaxed the homeschool timetable. The boys' teachers have been extraordinary and their support and interaction has helped us all, hugely. We owe them such a great deal ♥️ I wish you a moment when you smile today. Have a good weekend, and I am *always* a message away if you want to chat 😃 xx
I may yet be convinced that I should turn vegan...or at the very least, vegetarian. This vegan curry is from @slimmingworld. I'm not a Slimming World member, but I can see why it's so popular when you can eat things like this!! 😃 It's sweet potato and I added chickpeas and replaced spinach with kale, cause that's what we had. It's delicious!! 💚🍛 #vegan #veganuary #vegetarian #slimmingworlduk