In October 2016, Rob took part in his first organised cycling event: the Palace to Palace ride in aid of The Prince’s Trust. He enjoyed it so much that cycling has become a hobby of his, and he encouraged me to get a new road bike so we could go cycling together. With slight trepidation, I agreed and I bought the little beauty below.

Fast forward nine months to July 2017 and my first mass participation cycling event. Day 33 of #100DaysNoTV sees me take part in my first Women on Wheels charity ride through Suffolk.

Almost a year ago, I began a short-term contract with Abbeycroft Leisure, working with their social media marketing team. Based in Suffolk, they wholeheartedly promote many sporting activities in the county, and have organised the Women On Wheels (WOW) ride for four years, raising money for St Nicholas Hospice Care.

Helping to market this event for Abbeycroft Leisure was my introduction to Women On Wheels, but I already knew a bit about the charity for which this event raises money.

St Nicholas Hospice is based in Bury St Edmunds, and it has a charity shop in Newmarket; I volunteered there when we lived in the town before moving to Ely. My previous association with the charity moved me to register for the WOW ride. 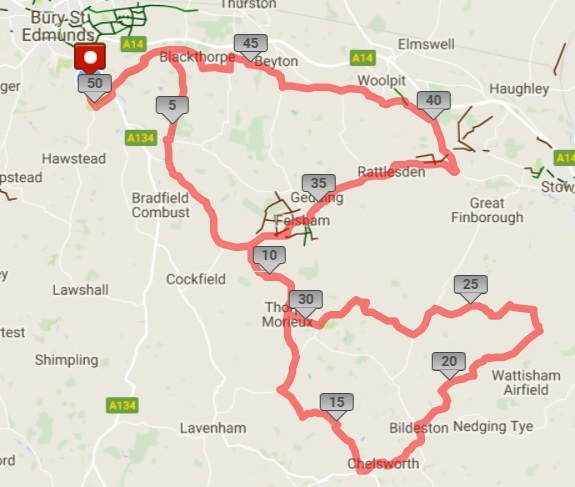 Our 50-mile route around Suffolk.

Starting in Bury St Edmunds, girls and women cycle together, following organised routes of varying distances through pretty Suffolk villages. All to raise money for a local charity. You had a choice of distance: 10, 25, 50 or 75 miles. Now, I’m not stupid. Cycling 75 miles is not for newbies like me! So I went for 50, for the challenge, and because it was further than Rob’s Palace to Palace distance. 😉

(I have to say, Rob has since blown my total out of the water, taking part in the 90-mile Tour of Cambridgeshire!) 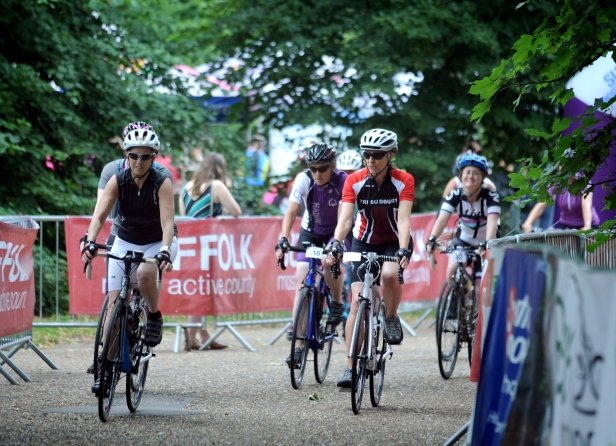 Until a few months ago, I didn’t know that an official mass participation road cycling event has a proper name: a sportive. Although not advertised as such, the WOW ride was indeed a sportive, which made the idea of it all the more exciting, and a little more nerve-wracking!).

For those of you who know your bikes, I bought a Liv Avail SL2 Disc. It’s a very comfortable ride, owing largely to the fact that the Liv bikes are designed for women, so they’re comfy in all the right places, and the frame geometry is optimised for the female anatomy.

I have to admit that my lovely Liv (she needs a name – any ideas?) didn’t have many miles on the clock before the big day. Such is the busy life of a mummy and freelancer. However, Rob and I have explored our beautiful Fenland countryside on two wheels – via a pub, normally! 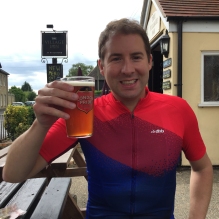 Living in Ely, we have a couple of local cycling clubs, one of which is Chatteris Cycling Club (CCC). Founded as recently as 2015, they’re quickly gaining a reputation for being very friendly and welcoming to riders of all ages and abilities – beginners and experienced.

My proper warm-up ride was on 2nd July, when I took part in a Pink Ribbon Ride in Chatteris, a small town 12 miles west of Ely. The event was a local version of the Pink Ribbon Ride which took place in London at the end of the OVO Women’s Tour Series in June, in association with Breast Cancer Care.

The “before” photo. With thanks to Gerry Wood.

Louise Smith, member of CCC and a British Cycling Ambassador, was the mastermind behind getting 40 riders together for this inaugural CCC event and I loved my first ride with the club.

The Pink Ribbon Ride is a female-only ride, and Louise used it as a platform to encourage local women to get cycling – some hadn’t cycled for years. It was a huge success, not only by raising many £s for Breast Cancer Care, but also for encouraging so many to become involved in group cycling – beneficial for fitness and for well-being.

I found out about CCC and the Pink Ribbon Ride from my lovely friend, Rachael Davies, who is an active club member. Funnily enough, I actually met Rachel through running: we’re both members of Run Mummy Run, and she features in my Cambridge Wineathlon post. 😉 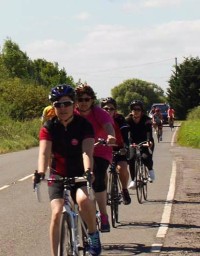 I’m happier than I look…

My support team join me for post-ride cake

I digress… Rachael is crazy about her cycling, and was unsurprisingly chosen from thousands of applicants to be an Ambassador for Primal Europe (of the beautiful cycling clothing) and her enthusiasm for the sport is so, so infectious. She was due to join me on the WOW ride but illness meant she had to rely on social media updates from the comfort of her bed. 😦

Nearly 230 women descended upon Nowton Park – on the outskirts of Bury St Edmunds – early in the morning on Sunday 9th July. Rob and the boys came to support me; I definitely couldn’t have done it without them. 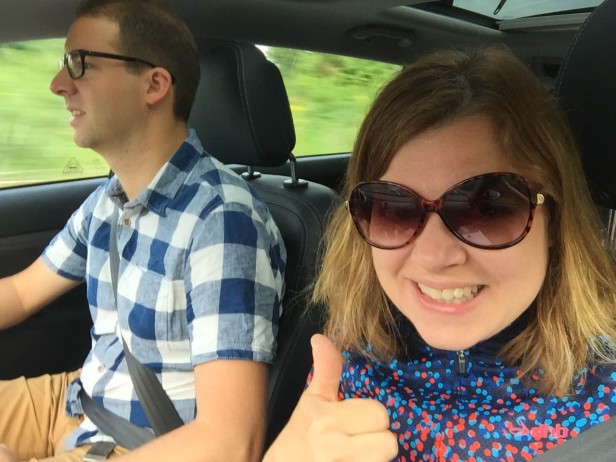 Excited to get to Bury

After a short welcome from Ian Evans of Abbeycroft Leisure, followed by a group warm up (which Ollie joined in with!), it was time for the off!

Important to warm up! 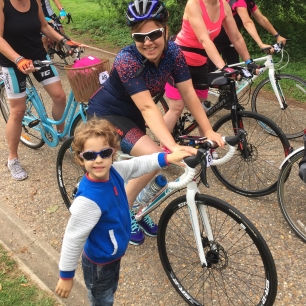 The start was staggered, so riders weren’t too bunched up. Having had no experience of group cycling on this scale, I wasn’t sure whether I’d be riding alone, or whether we’d all follow each other. We stayed pretty much as a group until around five miles, when we found our pace and either broke away or stuck with those of a similar pace.

Can you see me?

The route out of Nowton Park quickly became rural. And for rural, read ‘hilly’. Having grown up in Cambridge and now living in Ely on the edge of the flat Fens, hills don’t really feature in everyday life. I won’t pretend that they were easy to climb. However, the descents were amazing! I hit a top speed of 28mph. With more experience I’m sure I could get over 30mph. 😉

When I wasn’t going flat out, I tried to remember to look at the countryside and take it all in. It was a part of Suffolk I’d never been through before. It really was beautiful.

At the halfway point was a very welcome refreshment stop at the Punch Bowl Inn in Battisford. I didn’t feel tired, but my legs were slightly wobbly. The mountains of cake soon took my mind off that! I chatted to another Emma; we’d been cycling at the same pace throughout the first half, and decided to buddy up for the second half.

For a good part of the next 10 miles, Emma and I seemed to be riding on our own. At one point I wondered if we’d gone the wrong way! But, we started picking up the WOW marker flags again, so we were on track. There were fewer hills, thank goodness, and we passed through more villages as we got closer to Bury.

The last five or so miles were quite tough; I was starting to feel tired. It’s almost better not to see the countdown signs with “10 miles to go”, “5 miles to go”. I realise they’re trying to be helpful, but psychologically it’s hard when you think you’re closer to the end than you actually are.  😉 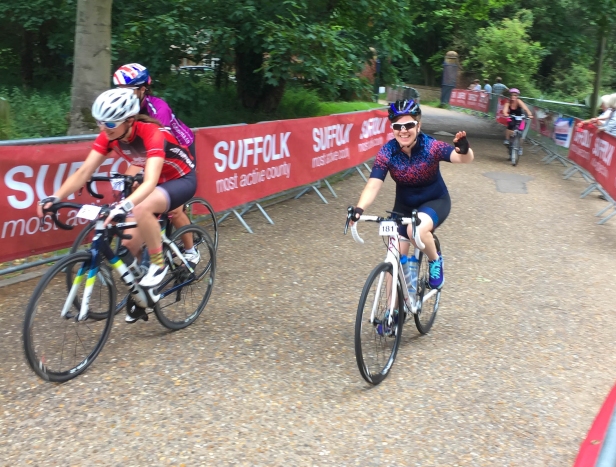 Relief to see my boys

The road back up to Nowton Park was an incline (of course) and I was soooo glad to see the finish line with my lovely boys there to clap me over the line. My Strava time was 3:59:38, with a distance of 51.7 miles. Pretty proud of myself.

Time for a quick photo with Emma and our certificates. I was so pleased we were able to buddy up, as it certainly helped on the tough bits; we’ve stayed in touch and are planning to take part in another cycling event. 🙂 We said our goodbyes, and the boys and I popped in to Bury for lunch, plenty of water and a large glass of wine! 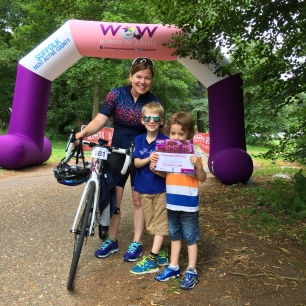 The WOW event was well organised, it felt safe with marshals throughout the route, there was a lovely atmosphere, and I had a really fantastic time. The total raised hasn’t been announced yet as money is still coming in, but it will be in the thousands. I’m not sure if I could be tempted with a longer distance, but I can definitely see myself taking part in quite a few more sportives, and I’m very keen to do another WOW.

Have you participated in any cycling events? What is the furthest distance you’ve cycled?

Grateful thanks to Gerry Wood of CCC for the Pink Ribbon Ride team photo, and to Jessica Nelson from Abbeycroft Leisure for the professional WOW photos, taken by Andy Abbott. 🙂

Now the heat has subsided, the boys and I could enjoy a cricket morning. We all love playing for @city_of_ely_cricket_club and it's such a treat having so much cricket on TV too. If you haven't yet watched #TheHundred you're missing out! If you think cricket is boring...think again. This format anything but dull! 😃🏏💚 #cricketlove #cricketlovers #womenincricket
These guys are playing it cool, but they're just as nervous as me 💛🖤
I'm not sure it's normal to be as excited as I am about this arriving today! 😂⚽ #grassrootscoach
What a way to spend a couple of hours 😎🏏