I think by now we all know that plastic pollution is a huge world problem and the effects on the environment and marine life are horrific.

It’s hard to know what you can do as an individual and it’s easy to feel powerless. The way I feel is that while my family is four people in 7.6 billion, we can’t sit by and do nothing at all. In the words of David Attenborough following Blue Planet II, “…if we start doing those small steps that are easily achievable, we can, before long, really have an effect.”

I live in Ely which is home to around 20,000 people, and the city is on a mission to reduce the number of single-use plastic bags used in our shops. It’s something everyone can get involved in and I’ve made my small contribution 🙂

Do you ever nip out to the shop and forget to take a bag with you? I do, and it’s really annoying! Now, what if the shop had free, reusable bags that you could borrow and take back or pass on to someone else? What if these bags were created from surplus, unwanted material and were made & donated by someone in your local community? Sound good?

Apologies for the cliché, but there is a great community spirit in Ely – it’s a small city with a big heart. There are numerous volunteer projects run by groups & individuals, and one example of this is the Ely Borrow Bag scheme created & co-ordinated by Lesley Partridge, owner of Sew Much To Do, in association with Visit Ely.

The idea is to get shops to join the initiative and hold a stock of Ely Borrow Bags. Shoppers can take one and return to the same or another participating shop, keep using it, or pass on for someone else to use…and repeat! 🙂 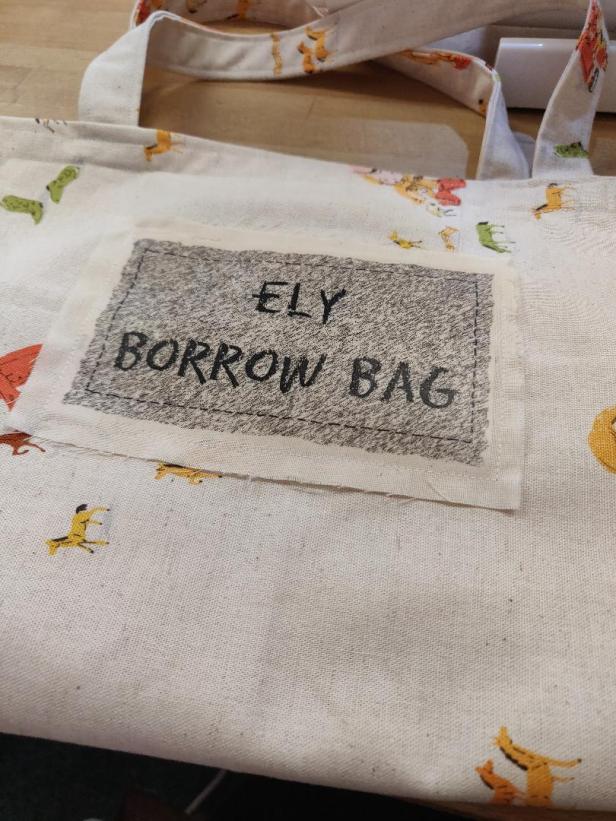 I discovered Ely Borrow Bags on Visit Ely’s Twitter feed and as I also follow Sew Much To Do on social media, I contacted Lesley. She runs fortnightly ‘sewcials’ (I know, isn’t that brilliant!) in the shop. I went to the first one with my friend Amy, armed with my first and very new Janome sewing machine.

I’d had around twelve minutes’ practice on my machine before the sewcial, and most of that was working out how to thread it! Ollie’s class had a Stone Age Day and making his costume required some sewing, but not a lot. So as you can imagine, I went with a bit of trepidation!

I needn’t have worried. Lesley and Annabel are so down to earth and welcoming; I had a brilliant morning. It helped that Amy was there too and the time flew by.

We had a pattern to follow and although the measurements depend on the fabric you have available, we followed the concept. Well, I say ‘we’. I was led through every single step 😉

I was unbelievably slow on the pedal to start with, but my confidence grew and my lines were pretty straight. It’s a satisfying process and in a strange sort of way, very relaxing. You do have to concentrate but you can switch off your brain at the same time. Other than taking photos, I didn’t touch my phone – some quality me-time. I can see it becoming addictive 🙂 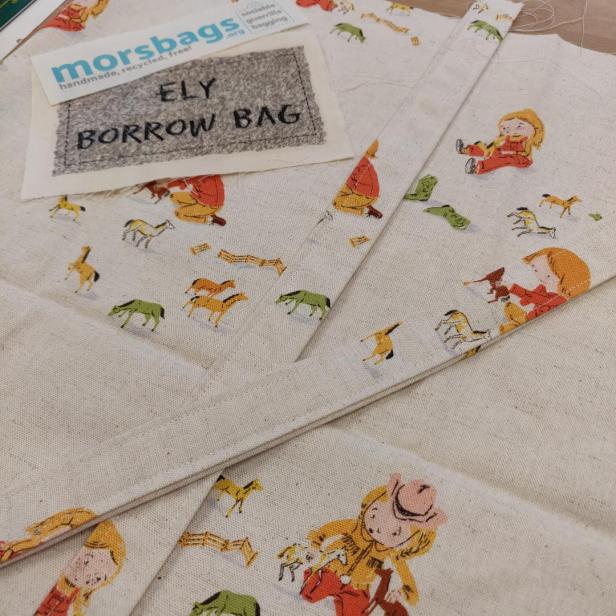 I expected to end up with a half-finished mess of fabric & thread and plasters on at least two fingers, but my hands were unscathed and I had a complete (and crucially, usable) bag! 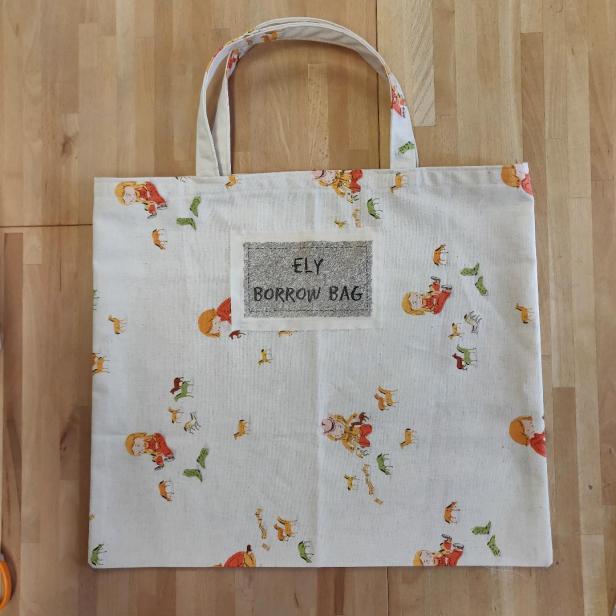 Upcycling reusable shopping bags isn’t a new idea. The Ely Borrow Bag has joined the Morsbags revolution and is an official ‘Pod’. There’s a nice bit of history behind this.

Claire Morsman lived on a houseboat after leaving Cardiff University and became fed up of seeing plastic bags floating alongside her home. She and boyfriend (now husband) Joe decided to do something about it.

Claire created a pattern for a bag that can be made from material that is usable but no longer wanted, and it was shared on their website. In 2007, Morsbags – Sociable Guerilla Bagging was born; there are now 1,833 Pods around the world and at the time of writing nearly 300,000 Morsbags have been made. Staggering! 🙂

No, that’s not a typo! There is a sewing challenge over on the Morsbags Facebook page which involves making a bag each day in November. That’s a big ask (plus I’m writing this on 7th!) but why not take some inspiration and make your first bag this month?

To be an official Morsbag it needs to feature their label. In Ely these are available at Sew Much To Do and the Visit Ely tourist office. For elsewhere, contact your nearest Pod which can be found on the Morsbags website. Importantly, don’t forget to log the number of bags you make on the Morsbag website so it will encourage others to take part too 🙂

Don’t have a sewing machine? Don’t fret. There’s plenty you can do.

* Borrow a bag, carry it with pride and pass it on
* Encourage anyone who shows interest to start using them too
* Donate some clean, reusable material – curtains, shirts, fabric offcuts, duvet covers…
* Join an Ely Borrow Bag (or your local) sewcial and borrow a machine
* Tell your mates
* Get it out on social media using #ElyBorrowBag #Morsbags

I’d love to know where my first Ely Borrow Bag ends up, and how many people use it.  Let me know if you spot it 🙂

Right, I’m off to raid my linen cupboard! 😉