Ah, Christmas. Seems like a distant memory as I write this. I had a little break from writing as it was a jam-packed December and new year for The Smiths, but I still want to tell you about one of my festive highlights: The Nutcracker at the British Museum.

I’ve been a member of the British Museum for five, maybe six years, and this was my first members’ event.

We went in early December, joining around 200 other guests for this gorgeous performance in the Great Court – if you’ve been to the British Museum you’ll know how stunning this space is during the day. At night, bathed in atmospheric lighting, it is magical.

Rob commutes to London by train regularly, and not wanting to mix with happy Christmas party revellers on a train home we drove the 70-odd miles from Ely to London. We put on some comedy podcasts which we can’t normally play around the boys – in case of naughty words – and we laughed our way down the motorway.

What an iconic sight!

After a short tube journey from Stratford to Holborn, a quick bite to eat, a hop, skip & jump down to Great Russell Street, we were met with the night-lit iconic frontage of my second favourite museum* in the world.

*I grew up in Cambridge, so my favourite has to be the Fitzwilliam Museum!

I don’t pretend to know anything about ballet, and I love listening to classical music but if you want to know who composed a certain piece, you’ll need to ask someone other than me! I have, however, had a love for Tchaikovsky’s Nutcracker Suite since primary school.

I have a vivid memory of being at infant school and watching an animated (and, I guess, massively shortened!) version of The Nutcracker. Even now, the music sparks warm memories and a craving for sugared almonds.

One of our Christmas Eve stories

We bought this book three years ago and it’s now one of our Christmas Eve stories; I hope our boys will grow to love the story forever, too.

Christmas at the museum

When I saw the programme for the museum’s Christmas events and noticed The Nutcracker was performance, there was an immediate, “We have to go to this!” The dancers are from Ballet Central, the touring company of the Central School of Ballet in London. The school is considered one of Europe’s finest for professional dance training – say no more! 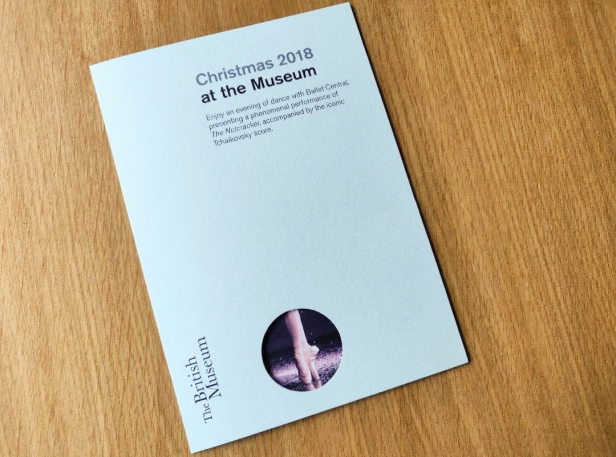 We got there early, registered and exchanged our tokens for drinks from the bar in the Egyptian Sculpture Gallery – Gallery 4. This is the time of day to be in the museum. Wow.

As a lapsed amateur archaeologist (I should really put that in inverted commas), I loved being able to wander around the gallery at leisure and see everything up close, in real detail; this must be what it was like to visit 100 years ago.

Although, they probably didn’t take selfies with the sculptures back then. He’s striking a pose, don’t you think? But, wait, has he got his eyes closed?

It was the first time we’d seen a harpist play live since our wedding day, 12 and a half years before, so that was a real treat. She played some Christmas favourites, so beautifully.

After 40 minutes or so, the doors to the Great Court opened and we walked through to the seating area. Seating was unreserved, and being a short person it’s always hard to know where to sit! We found good seats a few rows back from the stage, left of centre, and with the raised stage I was able to see everything comfortably.

Before the start of the performance, the outer walls of the Reading Room were glowing in purple light with falling, floating snowflakes projected on the walls. For a large open space, it didn’t feel too cold – or was it just the warmth of anticipation?

Reading Room in the Great Hall

The dancers silently descended the east and west staircases, either side of the Reading Room, to the stage adorned with oversized Christmas presents.

It was a 45-minute adaptation, unique to Ballet Central, choreographed and produced by Christopher Marney. Recorded music was used rather than a live orchestra; that was to be expected for this performance and the acoustics were perfectly good, the music was loud and clear, it didn’t matter to us that it wasn’t live.

End of the Snow Dance

E.T.A. Hoffman wrote his traditional fairy tale, The Nutcracker and the Mouse King, in 1816. Modern versions of the Nutcracker ballet name Clara as the story’s main protagonist.

The story begins on Christmas Eve when Clara’s father holds an annual Christmas party full of colour & sparkle. Clara’s Uncle Drosselmeyer brings her a wooden Nutcracker. Later, Clara dreams her new gift will come to life and fight the Mouse King, who she helps to defeat.

Magic transforms the Nutcracker into a handsome Prince and together they journey to the Land of Sweets. There, they meet the Sugarplum Fairy who is told of Clara’s bravery and summons characters from around the land to share in a celebration of dance.

I managed to take a few photos but the dancing was so captivating, it was easy to get lost in the storytelling. The costumes too were remarkable, so floaty and graceful.

All 36 performers were elegant and light on their feet. You realise when you’re this close to the stage just how strong ballet dancers must be. They clearly put in more work at the gym than I do 😉

As I said before, I know next to nothing about ballet. For a long time, it was something I wanted to experience first-hand, but it had never been top of my list; it felt beyond me, somehow. The performance at the British Museum was the perfect introduction for us both.

Cast at their curtain call

Before leaving we had a walk around the Grenville Room, which was charmingly festive. I don’t remember going in there before and it’s one of those places you don’t want to leave; there’s too much to see. Most of the pieces are either direct copies of pieces you’ll see in the museum or inspired by them. There was so much I wanted to buy. If I had a country house…

It was a gorgeous evening from beginning to end, a special festive date with Rob. And, it’s certainly given us a thirst to go to see a full-length ballet in the not too distant future. It’s likely to be in London. What would you recommend?