This book wouldn’t ordinarily appear on my radar; I normally gravitate towards a crime thriller or historical novel. When given a chance to read a proof copy of The Harpy, I looked up Megan Hunter’s debut novel: The End We Start From. It was described as “a gripping novel”, “strange and haunting”, “beautifully spare”. Good vibes so far!

In late classical mythology, a harpy was represented as a bird with the face & torso of a woman. For me, the striking jacket cover by Amy Judd represents a contemporary reimagining of the harpy. In legendary tales such as Jason and the Argonauts, harpies were creatures who punish men for cruel acts against women or children.

Now for a contemporary version… 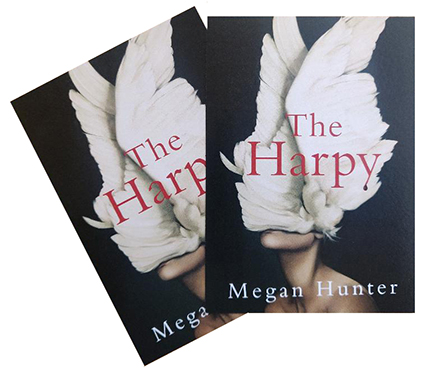 In Megan Hunter’s tale, the clever twist is that permission is granted for punishment to commence, as part of an extraordinary contract between a wife & a husband.

On the face of it, Lucy & Jake and their two children have a happy and contented life: Jake has a secure job that he enjoys; Lucy balances working from home with the needs of her family. All of this is shattered by a single phone call: Jake is having an affair with the caller’s wife.

An agreement is struck in which Lucy can punish Jake three times and they will stay together. He won’t know when these acts will happen or what form they will take.

For me, Lucy is relatable – at least in some ways! She’s a modern mum with two young children. She’s making the best of having her career on the slow burner so she can be the principal carer of their children. It’s a familiar story for many.

I didn’t much care for Jake, but that’s probably because the adultery was announced very early on; I don’t think we’re supposed to see many shining traits in him!

Where the story takes on a mythical, fantastical quality is when Lucy – while responding to this marital infidelity – begins both a physical and mental rebirth. 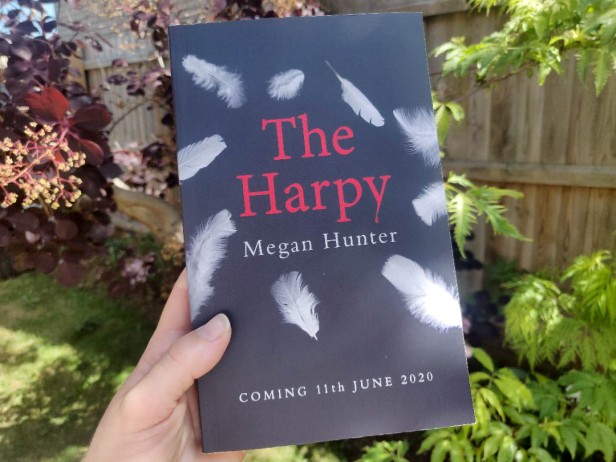 Proof copy of The Harpy

I found the story at times unsettling, but I enjoyed it to the end. A contemporary story of a regular family, with its flaws and struggles. If you enjoy books that aren’t afraid to make the reader uncomfortable in its honesty about real-life situations while staying on the right side of tasteful AND adding a mystical element, I think this will be one for you.

You can tell that Megan Hunter has a background in poetry: it’s written in such free-flowing prose that it’s effortless to read. Its short chapters make it easy to dip in-and-out easily, or you could finish it in one satisfying sitting. The dark and unexpected response to marital betrayal is written so well that, I think, you’ll also be drawn in.

The publication date of The Harpy has moved to 17th September 2020 as a consequence of the COVID-19 pandemic. I promise you it’s well worth the wait and will be perfect for a read when curled up on an autumnal day. Well worth a pre-order 😉

Disclosure: Thank you to Picador for sending me this advanced proof to read in return for an honest review. As ever, all thoughts and opinions are my own.

25 thoughts on “Book Review: The Harpy by Megan Hunter”

The first Ely City Women's match was earlier this month; it was so good to be back on the pitch, and felt amazing to play competitively after so many years. We proudly displayed our @hergametoo sleeve patches and flew the HGT flag ⚽ It's going to be a good season ❤️
Happy pre-match drinks in the Abbey Lounge for these Belles 💛🖤 #MatchdayBelles #AmberBelles
Football is home ⚽🏆🎉
This little legend beat around 90 other racers today. Second place in both the Radical and F1 simulators. He was told by an ex pro that he's a natural 😎🏎️ If he doesn't end up working in Motorsport in some capacity, I'll be surprised. He's a speed demon with an encyclopaedic knowledge of the races, drivers, even the mechanics of the cars. And he's 9! #silverstone #racingdriver #astonmartin #vettel #f1